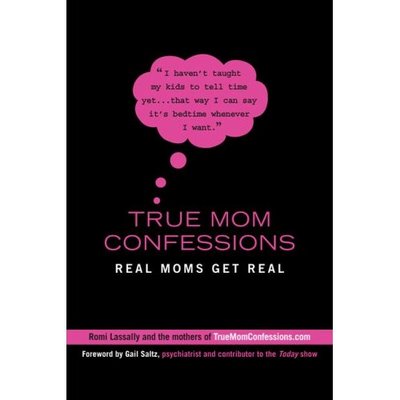 The Gay Uncle’s most excellent pal Romi Lassaly–founder of the hilarious, shame-divulging site True Mom Confessions–has an equally hilarious and shame-divulging new book out. Culling the half-million embarrassing, humiliating, cruel, and disgusting anonymous admissions she’s received from mothers all over the world, she’s created a compilation of truly incredible one or two line disclosures, called True Mom Confessions: Real Moms Get Real. The G.U. has been privy to a number of them in the past, in his role as snarky commentator on some of these revelations, but the sheer mass and horror of the ones collected in the book is transcendent. (And it makes great bathroom reading.)

Are you interested in finding out more? Well, you can! It’s time for another Gay Uncle book contest giveaway. Gunc has three copies of TMC:RMGR that he would like to give to you, his loyal readers. All you have to do is confess to the most humiliating thing you’ve ever done to, with, at, or around your kid in your role as parent. Points will be given for originality, grotesqueness, and sheer chutzpah. The contest will run through the weekend. So submit your admissions in COMMENTS below, and the G.U. will run an announcement of the winners on Monday.